Approximately 100 volunteers from The Church of Jesus Christ of Latter-day Saints congregations in eastern Montana and Watford City, North Dakota spent part of Saturday, September 11 serving at the 3rd Glendive Stake Annual Day of Service. Since September 11, 2001, September 11 has been designated as Patriots’ Day and as a national day of service and remembrance in honor of Americans and first responders who have lost their lives. Serving in our local communities is one way to recognize and honor their sacrifice. 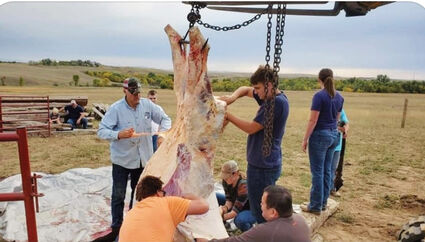 The Glendive Stake (similar to a diocese or district) of The Church of Jesus Christ of Latter-day Saints has 11 congregations and covers eastern Montana from the Canadian border to the Wyoming border and the border of North Dakota east of Miles City, with the area of â€‹â€‹Watford City. About 40 church members from the Sidney area cleaned up the garbage along Highway 201 for a mile on either side of the intersection near the landfill, the entrance to the Savage Household Garbage site and the areas around the Highways 16 and 58. In Watford City, a local rancher donated a cow and a group of missionaries and youth learned how to butcher. After being processed, the meat was then offered to local families in need. A cemetery on Broadus was the focus of the service as local church members continue to register all graves on the Billion Graves website. The Glasgow Children’s Museum benefited from 14 volunteers who came to clean up and help with the renovations. In Poplar, the rain called off the exterior cleaning of a vacant lot, but eight volunteers helped local missionaries clean their apartments. In Miles City, 24 volunteers spent several hours at the Custer County Cemetery cleaning headstones and markers. One volunteer, Lisa Kraft, summed up her experience as follows: â€œIt was a great experience doing an outreach project for the community. soul.”

The Glendive Stake and Member Day of Service has become an annual tradition as a way to improve our communities and honor those who fell on September 11.