Donors and takers against the virus (Part 2)

All it took was a sidewalk cart filled with vegetables, fruits, rice, eggs, canned goods and other things to prevent or combat the onslaught of covid-19. And the message scribbled in pilipino on a cardboard nestled on the adjacent lamppost translates to, “Take as you need, give as you can.” “

From there, it looks like a seed burst and quickly turned into thousands of street flowers. The Maginhawa Community Pantry set up by Ana Patricia Non in her Quezon City neighborhood on April 14 has since inspired hundreds of similar food stalls in less than a week and more than 6,000 across the country in one. month.

For days until now, Facebook has been inundated with community pantry photos and stories. A showcase of the Filipino spirit of helping others in need called â€œBayanihanâ€, they also show the creativity and humor of people in promoting the concept of charity. From staple foods, “take out” has expanded to variations such as hawker food on sticks and “taho” (sweet, syrupy beancurd), shoes, clothing, plant grow kits, books.

A snapshot: Fr. Jovi Nepomuceno has organized a community pantry where he exercises his role of good shepherd, the parish of the Immaculate Heart of Mary in Antipolo. On its scenic grounds on the road to Hinulugang Taktak’s famous picnic attraction, the lines are blessed with generous donations, some from Caritas, the social arm of the Catholic Church. Not new to charity work, the beloved priest has already organized breakfasts for the needy in the community after Saturday mass. 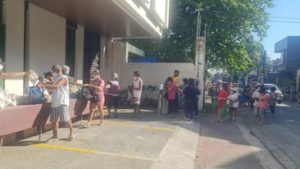 Evelyn dela Paz, the charter president of the Marikina Inner Wheel Club organized a community pantry outside the family events venue for five days in two weeks, distributing 300 packets of rice, vegetables, eggs, canned food that she solicited from her various, church, business groups. On the day of my visit, the tricycle drivers in the “barangay” were the main beneficiaries, but still a motley group of locals lined up on the two sidewalks of the road traveled by jeepneys and trykes. Also in the same town, young mother Glenda Jaca asked market vendors to bring their leftover vegetables at the end of the day to her small stall in an alley in the street. 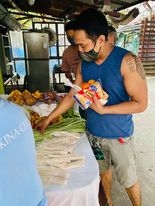 Belinda Jacob first ordered supplies from a store to put in the community pantry that her husband organized in Quezon City for their two charismatic organizations (Ligaya ng Panginoon and Tahanan ng Panginoon). Soon after, donations poured in profusely during the ten days that it was in operation. Before her eyes, she saw how the Lord provided through the generosity of the people. As for continuing their pantry beyond May, this Bible studies facilitator relies on Philippians 4:19 regarding God providing for all of our needs.

One of the most prominent and outspoken Catholic church leaders, Bishop Pablo “Ambo” David of the Diocese of Caloocan, claims that the emergence of community pantries (like what he installed in the San Roque Cathedral), is among “the clearest and most tangible signs of hope amid the despair caused by the pandemic.”

The 26-year-old non-lady worker from Maginhawa, widely applauded and awaiting senatorial recognition for her initiative, can even shine for the rest of her life. Truly, the seed of goodness in his heart has done good to both takers and donors in the incidental and instantaneous movement for people’s solidarity.

“Take what you need, leave what you can:” students build community pantry